North Wales is the home of narrow gauge railway. These were built to service the slate quarries which were in abundance around here in the late 1800’s. Due to the quarries being in remote locations these railways run through some of the most picturesque quiet countryside as they snake their way through the Welsh Mountains.  95% of British slate was quarried here as well as a large proportion of the World’s requirement.

The entire ‘set’ of 10 railways and one tramway can be done in the 6 day/5 night tour. We realise than this may be a bit too intense except for true fans, so we can do shorter tours of two or four days if that suits you better. 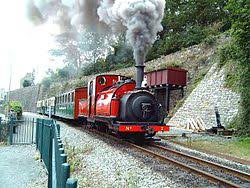 The tour of the railways travel firstly to the Llangollen Railway, a 10 mile long standard gauge running alongside the scenic River Dee, before continuing into the Welsh hills and riding on the Bala Lake Railway. The line, which is 4 ¹⁄₂ miles long, is built on a section of the former standard-gauge Ruabon–Barmouth GWR route that closed in 1965.

Our base hotel will be at Dolgellau, an ancient Welsh riverside market town.

Today we drive to Caernarfon to join the Welsh Highland Railway.  This 25 mile long narrow  1ft 11″ gauge line is a testament to the volunteers who carried out the tracklaying. It has some truly breathtaking views of Snowdon and the Aberglaslyn Pass.

After pausing for lunch in Portmadog, we will catch the Ffestiniog Railway to Blaenau Ffestiniog. This 12 mile long, 1′ 11″ gauge railway takes us on a steep climb up to the slate capital of the world, before we catch our coach back to Dolgellau. 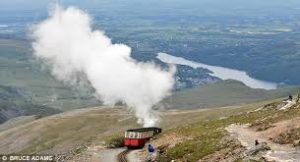 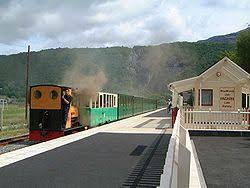 After an earlier than normal start, we catch the first train of the day to the summit of Snowdon.

This iconic 2′ 7″ gauge railway has the only public rack and pinion system in the country. There are magnificent views to be savoured as it climbs to wards the summit of its 4.7 mile journey. (Weather Dependent).

After our descent, we will drive around Lake Padarn to join the lakeside 1′ 11″ gauge Llanberis Lake Railway. This short 5 mile return trip is very relaxing as it ambles alongside the water.

Following lunch, we will travel deep in the old mine workings inside ‘Electric Mountain‘ at Dinorwig to see the largest pumped storage, electricity generating, plant in Europe

A bit more of a relaxing day today, when we take a scenic drive to the Victorian resort of Llandudno.  Our only ‘train’ of the day is actually a tram. 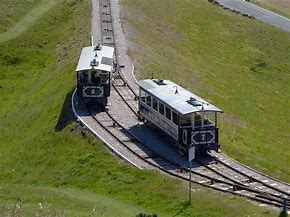 The 3′ 7″ gauge cable hauled Great Orme Tramway was opened in 1902 and now takes over 200,000 passengers a year. Spectacular views of Llandudno and of West Bay can be enjoyed at the summit.

After descending, the rest of the day is free to explore and enjoy Llandudno before we travel back to Dolgellau.

Today we travel south-west to Towyn on the Cardigan Bay coast and join the first ‘preserved’ railway, the Talyllyn. In 1950 the well known canal and rail enthusiast, Tom Rolt, suggested that this line should be preserved.  Nowadays the 7 mile long, 2′ 3″ gauge railway pulls many thousands of passengers per year.   It climbs steadily, firstly in the open and then in the forest to  reach Abergynolwyn where we disembark.

Our coach takes us down to Fairbourne for a return trip of 4 miles to the Mawdach estuary where we can see the famous Barmouth Bridge. 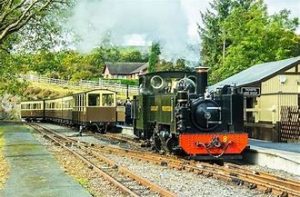 Today takes us south again and a ride on the Vale of Rheidol Railway which was British Rail’s last operating steam railway until 1989.  We drive to Aberystwyth and make the 12 mile journey up to Devil’s Bridge waterfalls. We will have plenty of time for sightseeing before rejoining our coach.  Our drive now takes us past the sources of the rivers Severn and Dee and arrives at Llanfair Caereinion where we join our final train, on the Welshpool & Llanfair Light Railway. We will have some free time in Welsh pool before our journey returning us to Shrewsbury.

In common with all our tours, we can amend the itinerary as required. Maybe add a free day to explore in Llandudno, Caernarfon, or the Italianate village of Portmeirion.